The “Travancore Royals Club” in association with the All Saints’ College Union 2019-20 launched the Travancore Royal Club Women’s Football Academy on 21st of January 2020. It was a day of pride for the college as history repeated itself on this momentous occasion. The first women’s football team in Kerala was formed in 1975 and was hosted by this prestigious institution. Years later, in 2020, All Saints’ College became an important part of Kerala history as it hosted this great initiative by the Travancore Royals Football Club for the empowerment of women in the field of sports. 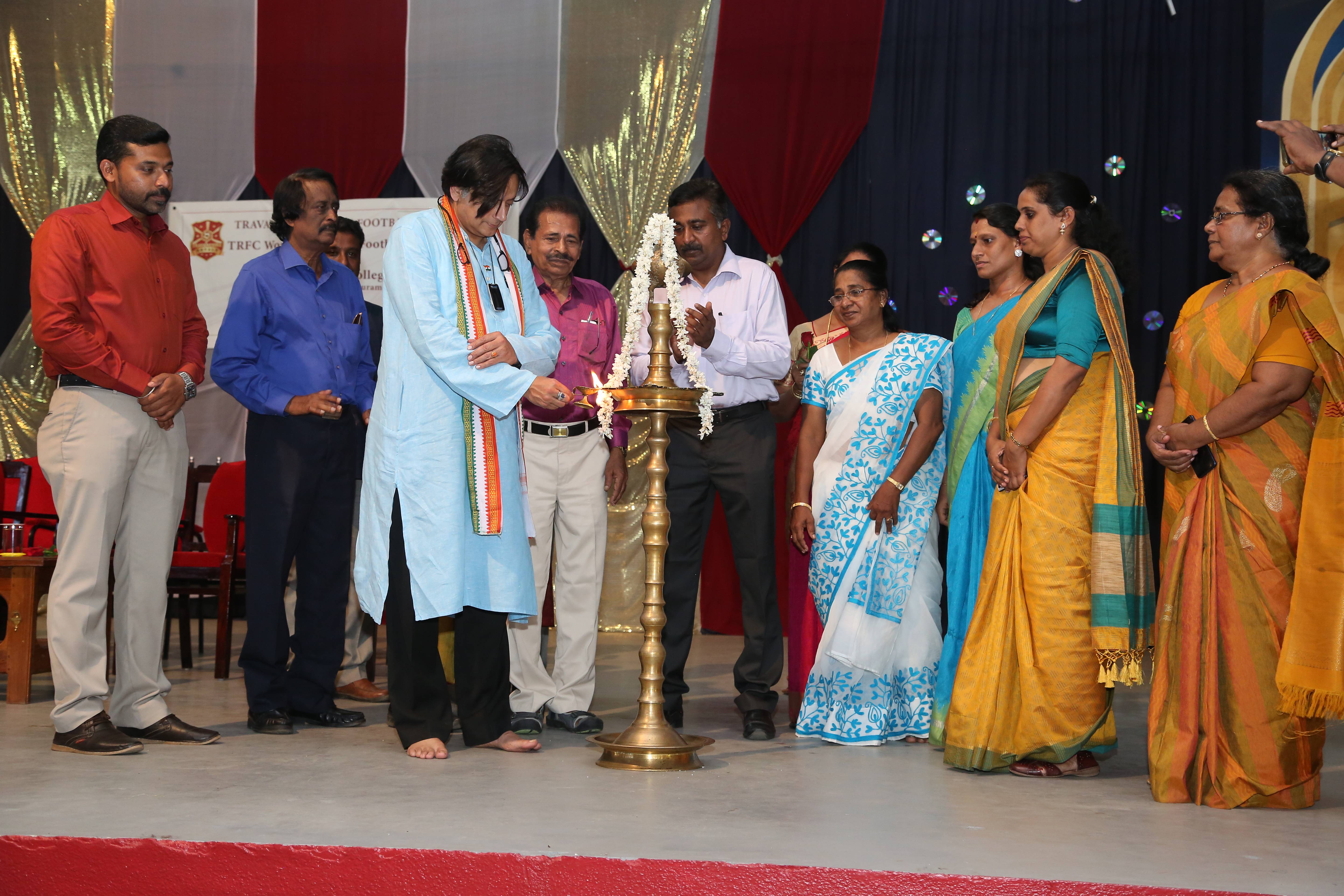 The audience was thrilled to have the Honorable MP, Dr. Shashi Tharoor, who himself is a sports enthusiast, as the chief guest. The dignitaries on the dais joined the chief guest in the auspicious lamp lighting ceremony. The guests of honour included Dr. Deepa M., our dear principal, Dr. Margret Leena, the Head of the Department of Physical Education, Dr. Gabriel Joseph who was the first Women’s Team Coach and a great inspiration to the women’s football team in India, Shri Shaji Oommen who is an Ex AIFF/AFC Coach Director and Ex Indian Players like Smt. Lalitha, Smt. Ayona, and Smt. Beena. 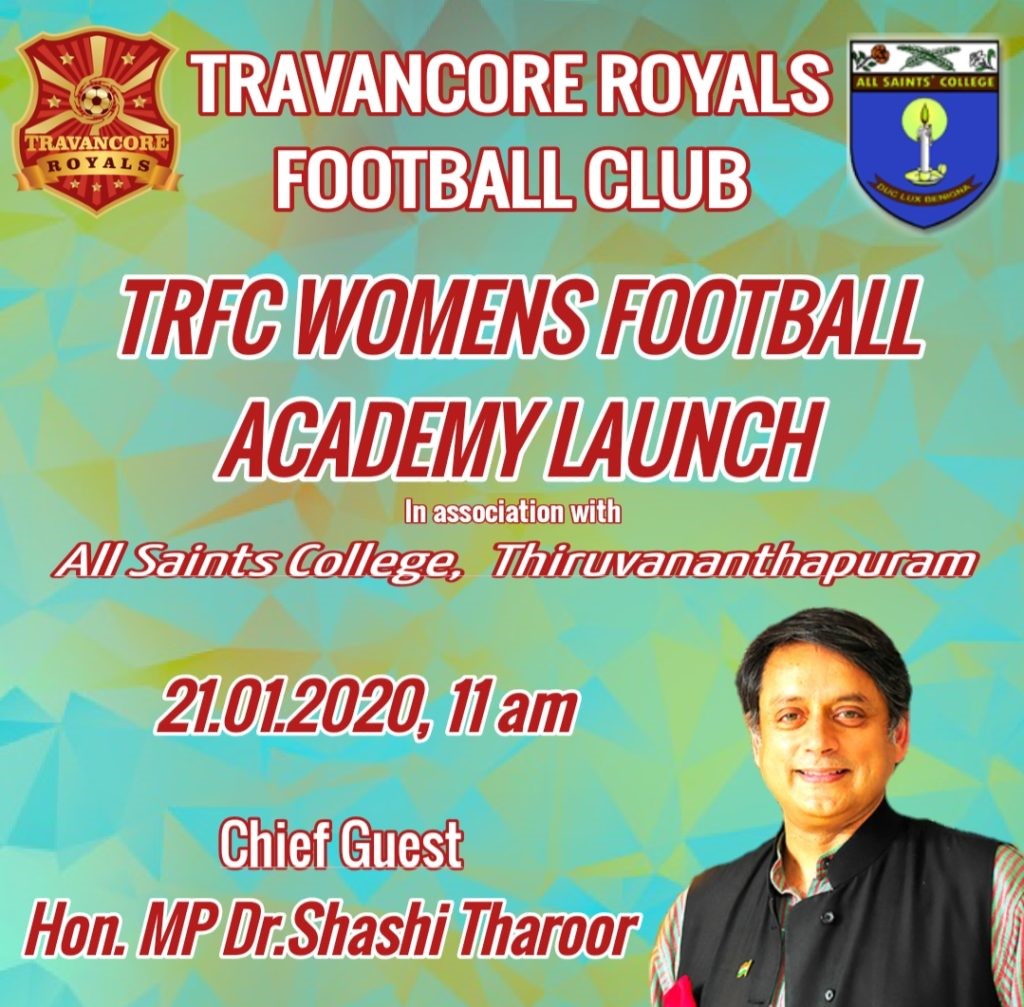 The Hon. MP, Dr. Sashi Tharoor said that it was indeed his great pleasure to bear witness to this ceremony in All Saints’ College as the institution had set examples as to how women can shine in all spheres of life. The MP said that he envisaged a time when the lamp will be lit by an all women team. It was indeed a pleasure to have him as his presence was to acknowledge the fact that a woman can be the best version of herself and achieve excellence.

Dr. Tharoor also felicitated Dr. Gabriel Joseph, Shri Shaji Oommen and the three ex- Indian football players Smt. Lalitha, Smt. Ayona, and Smt. Beena. The team launch was officially announced by the hon. MP. The session ended with the Vote of Thanks delivered by Mr. Jibu Gibson, Secretary and CEO of the Travancore Royals. Smt. Lalitha kick started the events by rolling the football towards the team members.

Hand sanitizer for 'Agents of Hope'

All Saints College Celebrated feast of Our lady of Lourds

Youngsters get Wetland Schooling at Vellayani

Sargotsavam organised by Department of Malayalam on 7th February 2020

The Mashithandu Club under the aegis of the Department of Malayalam is organising a cultural fest,

The NSS Unit of All Saints' College is organising a Cancer Awareness Programme on 04-02-2020 in association with Susrutha Charitable Medical Trust.

National Seminar on Problems and Prospects of Transgender Community, organized by Department of History and Political Science, on 29th January 2020

National Seminar on Problems and Prospects of Transgender Community

One Day Seminar on Taxanomy & Biodiversity on 11 November 2019, Organized by Department of Zoology

Inauguration of Literary and Debating Association 2019-20

The Literary and Debating Association of the Department of English will be inaugurated by Dr. T.K. Anandi, State Gender Advisor, Government of Kerala on 30-09-2019.

The Department of English in association with Mathrubhumi is organising a Debate Competition on the topic, "Uniforms must be made necessary in colleges" on 23-09-2019

National Workshop on Cheminformatics in Drug Discovery and Research

One day Workshop on Teaching English Language Skills on 05-08-2019.

National Seminar in 'Ethics in Higher Education: Policies and Praxis'

The College celebrates its Golden Jubilee marking 50 years of academic excellence and service. A debt of gratitude is owed to the leaders who have made the institution what it is today.